Hazard mapping for natural disasters is useful for railway maintenance and disaster prevention planning. Having a system which could show various natural disaster factors in an integrated display would facilitate evaluation of many different types of disaster scenarios for disaster prevention planning, and make it easier to identify the sources and external forces involved. Such a system would also facilitate the design of effective countermeasures.

The probability of disasters and safety factors are evaluated from extracted hazard factors, such as slope angles and distribution of exposed rock, and estimated external forces such as amount of precipitation, wind speed and direction (Figure 1).

A combination of methods already developed by RTRI and a new technique for extracting data about ground surface changes using airborne LiDAR (Light Detection and Ranging) and large area stability analyses of slopes during rain, was used to extract disaster factors, estimate external forces and evaluate the probability of disaster occurrences.

Using the newly developed hazard mapping technology, it will be possible to visualize spots vulnerable to natural disasters. This new system will be a useful tool for disaster prevention planning, since it will be possible to visualize on one single display not only the probability of occurrences of different types of natural disasters, but also their disaster factors and the magnitude of external forces. 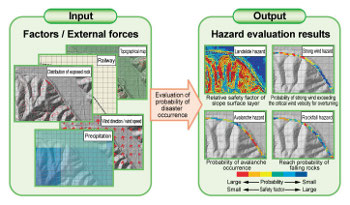