5. Measures against buckling of ballasted track during earthquakes

As seismic motion is acting on ballasted track, lateral ballast resistance force falls, causing track panels to buckle easily. During hot periods over the summer, rail temperature (axial force) rises increasing the lateral force which can lead to track buckling, and consequently further reducing track buckling stability during seismic activity. At the same time, no method has yet been established to assess the track buckling stability during earthquakes, making it difficult to evaluate the effectiveness of measures taken.

A test method was developed using special springs with small tensile load variation whereby the lateral load on the sleeper can be maintained even during shaking. Tests on a large scale shaking rig demonstrated that it was possible to quantitatively evaluate the track buckling stability of various anti-buckling measures, through indices based on lateral sleeper displacement (Figure 1).

Figure 2 Lateral ballast resistance force during, before and after shaking 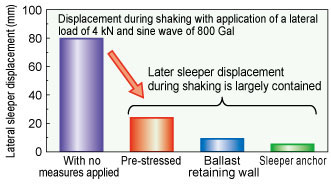