Railway embankments sustained extensive damage from the tsunami triggered by the 2011 off the Pacific coast of Tohoku Earthquake and the operations of railway lines were suspended for an extended period of time. A new reinforced embankment design was therefore developed to resist seismic motion and prolonged overflows caused by Tsunamis.

Tests on a model embankment were first carried out in order to gain insight into the causes of tsunami damage. Results showed that seismic motion weakens the levee part and slope protection of the embankment. Subsequent tsunami overflow then erodes the embankment levee and the supporting ground around the toe of the slope, leading to overall instability, and eventually to collapse.

Therefore, by arranging geosynthetics reinforcement materials inside the embankment and the protective slope, resistance to seismic motion and prolonged overflows can be improved. In addition, cement-treated gravelly-soil slabs were added to the bottom of the embankment levee using both cement-treated well-graded gravel and geosynthetics. The combined use of these reinforcement measures comprises the new method designed to prevent erosion of the supporting ground due to scouring and subsequent instability of the embankment (Figure 1).

Tests on model embankments showed that the conventional type embankment resisted well to a large scale earthquake (L2 seismic motion), however half of the embankment was eroded within 6 minutes of tsunami overflow. On the other hand, the newly developed embankment was hardly affected by erosion at all (Figure 2).

Preparation of a technical manual indicating practical design and construction methods for the proposed structure is planned for the future. 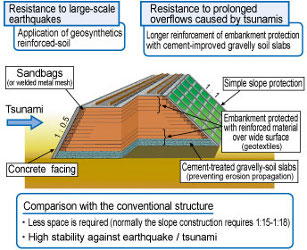 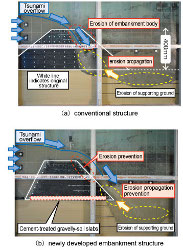