A simulator was developed to identify locations which were vulnerable to earthquakes on the railway network (Figure 1). Data regarding the fault, ground and structures were collected into a database. By using the data, the simulator constructed numerical analysis models of the fault, ground, and structure, in order to evaluate the seismic response of the ground and structures. Information about damage obtained through analysis of the data was then linked to map information, in order to allow visualization of structural damage in disaster hit areas.

Accuracy of the method was also tested by comparing estimations with data from the 1995 South Hyogo Earthquake, and evaluating the seismic response and damage to structures over a 13 km stretch where damage was particularly severe (Figure 2 (a)). The structures examined were 69 viaducts. Seismic intensity evaluated using the simulator gave estimations accurate to within a margin of ± 0.5 with measured data (Figure 2 (b)).

Accuracy of structural damage evaluation, in terms of identifying those structures which require restoration, produced results with an error margin of approximately 12% (still within safety side assessment) (Figure 2 (c)).

These results indicate that the method is precise enough to detect vulnerable spots on the railway network.

With the prospect of the forecast large-scale earthquake directly beneath Tokyo, and a Nankai – Tonankai Earthquake, it is important to be able to plan seismic reinforcement work, and construct recovery scenarios. This simulator should serve as a supporting tool in this regard. 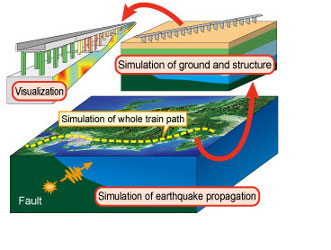 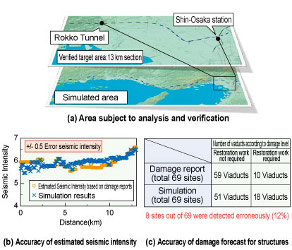