Proposals have been made for steering systems which improve driving performance through curves by extending the wheel base on the outer rail, however, given the risk of reverse steering due to an operational malfunction in an electrically powered steering system, the proposal was not adopted for practical development. Following this, a safer steering system was developed which performs mechanical steering control based on the angle between the vehicle and the bogie when driving through a curve (Figure 1).

The proposed system does not require electrically powered control for steering due to the new link mechanism which connects the device which detects the bogie angle based on interaction between the vehicle and the bogie while running, with the compressed air control valve for supplying compressed air to the steering actuator.

The steering actuator also has a built-in anti-reverse steering valve, creating a mechanism where active steering with compressed air is only possible in the direction of the self-steering force of the wheel. At the same time, if a malfunction arose with the air distribution system, the normal longitudinal stiffness of the primary suspension acts as a fail-safe mechanism.

Tests on a vehicle equipped with the proposed system showed that the new steering device reduced lateral forces by 80% compared to no steering control (Figure 2). Furthermore, in the case of a hypothetical malfunction causing reverse steering, confirmation was obtained that the anti-reverse steering valve prevented an increase in lateral force.

As the present system was built for a bolsterless bogie, it can be made light and compact with the same level of performance for heavier, more complex, bolstered bogie-angle linked steering trucks.

Future tasks for the development of this device include high-speed performance tests which could not be conducted on the running test track at RTRI, and durability tests on the bogie angle detection device, which are required before placing the system into service. 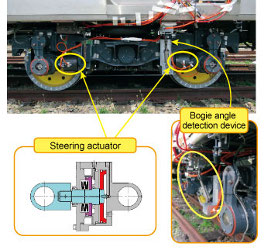 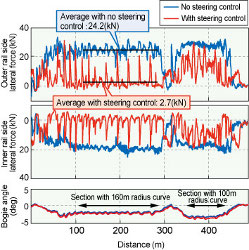