When rail vehicles run through curves with largely twisted tracks, such as transition curves emerging from a main curve, it is possible that the torsion between the vehicle bogie and the rail surface will cause a decrease in wheel load on the outside wheel of the front axle (in relation to the driving direction). When large lateral forces are associated to this, flange climb occurs causing a risk of derailment. Decrease of wheel load or lateral force suppression control is an effective means to prevent flange-climb derailment.

In order to suppress decrease in wheel load, a bogie was developed which is able to control decrements in wheel load (Figure 1) for use on conventional trailer vehicles, in the form of a rotating mechanism installed between the side beams and cross beam of the bogie frame. The right and left side beams of the bogie can rotate freely in the pitching direction through the rotating mechanism. Consequently, the device offsets the torsion generated when the vehicle moves through large horizontal plane variations on the track, controlling decreases in wheel load and thereby improving safety against flange climb derailment.

In order to verify the basic functions of the new device, running tests on a transition curve after a main curve on the RTRI test line were conducted. Results showed that compared to normal bogies where the side beam and cross beam are welded together, the new frame controlled and managed to reduce decrease in wheel load by a maximum of about 40% (Figure 2).

Further running tests on the rolling stock test bench showed that running safety was not impaired even at a speed of over 300km/h confirming that the new device does not have a negative impact on running stability. 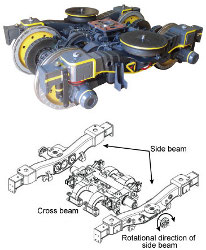 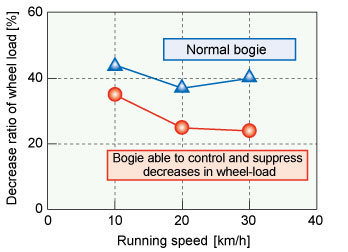 Figure 2 Effectiveness of wheel load-decreasing suppression
(on exit of transition curve, in bend with radius of 160m)