Japan is currently expanding its ocean bottom seismometer OBS) network (Figure 1). Data about earthquakes occurred beneath the sea collected through this network is used for issuing early earthquake warnings, which can be useful for railway earthquake disaster prevention. As such a method was designed to employ OBS data in early warnings, while telecommunication specifications and quality management technology were developed to maintain early warning reliability.

In the proposed method the OBS data sent to land observation stations through undersea cables is used to calculate the indicators which will determine whether a warning should be issued or not. The data is sent via telecommunication networks to the railway operators together with other information which indicates the quality of the data. While taking into account data quality, railway operators then issue a warning if the indicators exceed the regulatory threshold value (Figure 2).

Technology was then developed which immediately calculates data quality information based on waveform observation which indicates missing data, noise, etc. to ensure warning reliability, and which railway operators can refer to when deciding whether to issue a warning or not (Table 1).

It is expected that using OBS data should increase the spare warning time for earthquakes by approximately 20 seconds at most. 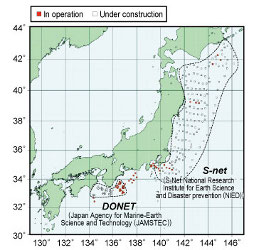 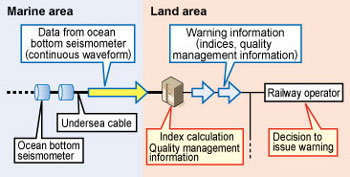