The Shinkansen network is being extended to regions which are exposed to cold weather. Gear oil for Shinkansen trains therefore needs enough fluidity to start gear units at low temperatures of around -30°C, while having sufficient viscosity to allow oil film formation at high temperatures.

The increase in viscosity at low temperatures of current gear oil however means that resulting fluidity at -30°C is insufficient. However, gear oil which uses synthetic base oil is more expensive than the gear oil used at present. Therefore, a new gear oil was developed which not only has sufficient fluidity at these low temperatures but also keeps extra cost to a minimum and ensures gear units are able to start at low temperatures of around -30°C (Figure 1). The developed gear oil uses a highly purified mineral oil as the main base oil, which is purer than the one used in current gear oil, and contains different additives.

Starting tests on a gear unit in a cold environment showed that even when the oil level has fallen to the minimum limit, the gear unit was able to start stably at a temperature of -30°C (Table 2).

Tests confirmed that oxidation stability, resistance to loads and anti-wear performance of the new gear oil, were comparatively the same or better than in the current oil. 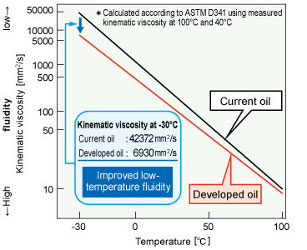